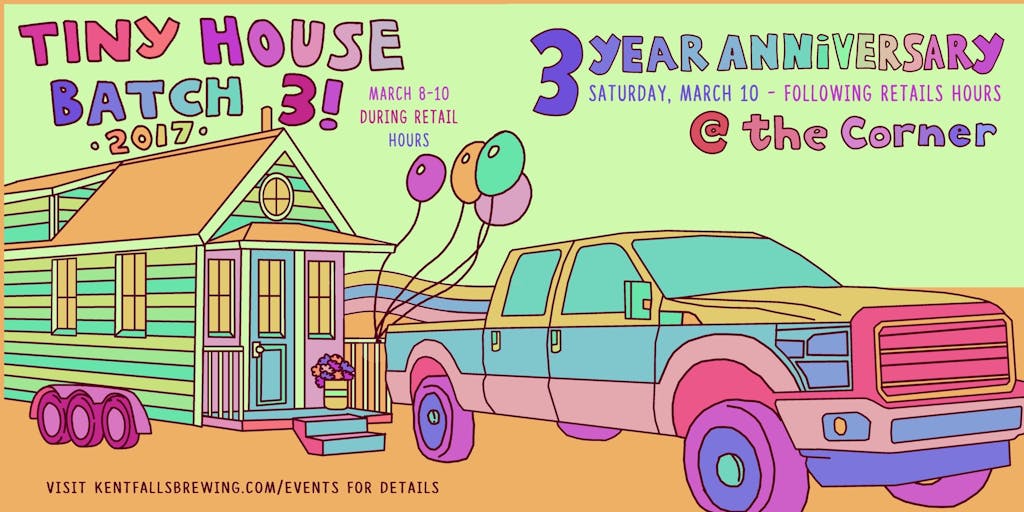 On March, 10 2015, there was an open draft line @The Corner in Litchfield that was patiently awaiting beer to run through it. Sometime around 1030 pm, after spending the night kegging our first batch of Field Beer, we made it to the bar and delivered our very first keg. Our first official glasses of Kent Falls beer were only minutes behind.

Every year since we have put together a little anniversary party @ The Corner with a selection of amazing beer from our cellar and most recent releases. This year, for our 3rd anniversary we have a special addition to the traditional anniversary tap takeover. With the long overdue presence of our tasting room, during regular retail hours on Saturday March 10th we will be releasing the third batch of Tiny House.

To say the least, Tiny House is a very special beer to us. It’s almost certainly one of the most fun brew day of the year. As a harvest beer it is made only once a year at our annual hop harvest and pig roast where we use hops picked fresh off the bine. The hop harvest festival is a day where we are able to interact with and celebrate our connection to agriculture and community. The 2017 festival was our fourth harvest and third batch of Tiny House (the hop yard predates the brewery).

Tiny House and our Hop Harvest festival are ever evolving. This year’s batch has been packaged in larger format green 750 ml bottles for the very first time. We are extremely excited about the additional character this will impart in the beer as it develops over time. And for those interested in magnums, we have a select amount that will be sold as part of a VIP ticket option to this year’s harvest festival.

And once the tasting room closes at 5pm we will be heading to @ The Corner in Litchfield to join in on the tap takeover.