Over the past month we have been doing a lot of two things, plowing snow and brewing; and it’s about time we add another process to the routine. I haven’t had much time to write recently, but someone recently asked me a poignant question: whether we had properly celebrated brewing our first batches of beer or if it felt as if brewing was just another step along the way.  I don’t think the answer to this question is an either or, because we certainly opened up a few nice bottles of beer after our first 17 hour brew day, but the latter feeling certainly held weight.  There is a certain anticlimactic nature to producing your first few batches.  As exciting as all of the “firsts” in the brewery are, until you can share it with others, it feels premature to be celebrating or think of the experience as being 100% operational until our beer is available on the market.

Which brings me to here today.  Let’s get you some beer!

At the beginning of the week we had accumulated roughly 85 bbl of beer, in various stages of fermentation, between our three tanks.  Cascading production by a week, we have gone through the majority of the production process except the part that is most crucial in sharing our beer with you.  Packaging!

Our first batch of Field Beer has been resting for a few weeks now, and is finally ready to be kegged and bottled.  As our first batch, the intention was to barrel age the majority of the product with the assumption that we would use it as a trial run to fine tune our brew house.  As it turns out, we not only had terrific brewhouse efficiency but we are ecstatic with it’s character so we will be releasing a larger volume of it off the bat.

There is an inexplicable romanticism to wine barrels.  An attachment to the old world before temperature controlled tanks, inevitable aspects of wild fermentation, bacteria, flavor reactions between a vessel and it’s contents that cannot be reproduced in any steel tank.  To make things even more interesting, we are starting our barrel aging program with a mix of red and white wine barrels, made of both American and French oak.

Once the barrels were filled and bunged, they were moved to the side where they will sit for many months and develop new flavors and aromas from the introduction of additional microbial cultures, both out of the wood itself, as well as from our library of wild yeasts and bacteria. 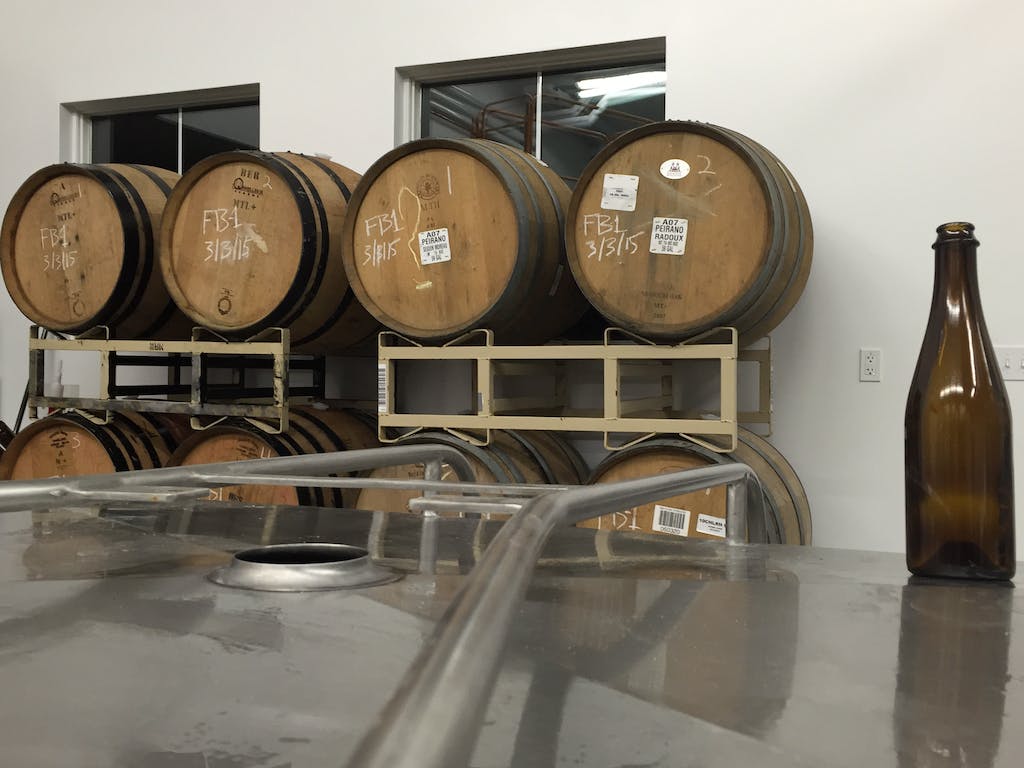 Each of the barrels is 59 gallons, just under 2 bbl of beer.  Filling up 8 wine barrels (a bit shy of 16 bbl of beer) takes up almost half of the 34 bbl batch we produced.  The rest of the beer gets transferred to our brite (packaging) tank.  Here, the beer will be chilled to 32 degrees so it is stable for packaging and as much of the last remaining yeast sediment drops out as possible to produce an unfiltered yet sediment-free finished beer.

From here it will be packaged into kegs and bottles.  The plan from here on out is to fill roughly 10-11 bbl worth of Field Beer into sixtels, and the remaining 5-6 bbl into bottles.  And here is the cool new feature we have added to our website:

For those of you looking to find our beer, there is now a map on our site in the Where to Find It that shows each delivery location, with blue marker for bottle shops and yellow markers for draft accounts!

For those of you interested in carrying our beer, e-mail us at [email protected] and we can make arrangements for delivery.  Of course we will be reaching out to accounts as well, but with a limited amount of beer it can help insure you get some!

And now back to the brewery floor, where we will begin kegging and bottling.  You can expect the beer to be released by the end of next week!  Who knows, we might even pop up and be there to pour our first beers at one of our local taverns before then.