The farm and brewery are run as distinct businesses, each with it’s own staff, customer bases, sustainability goals, and daily tasks that need to be done to make sure each is functioning properly.  With the brewery located smack in the middle of the farm, it’s pretty easy to see how the two are related, but there is no area where the two businesses intersect as much from an operational standpoint as the hop harvest.  The  well water, wild yeast we’ve collected, and other tangible gifts from the land that go into our beer connect the two at a different level.

So in the month leading up to harvest time, our farm manager John, Nick and I worked very closely to monitor the hops, plan the event and make sure both sides of the operation were represented when it came time to share in our labor of love with some friends and family. 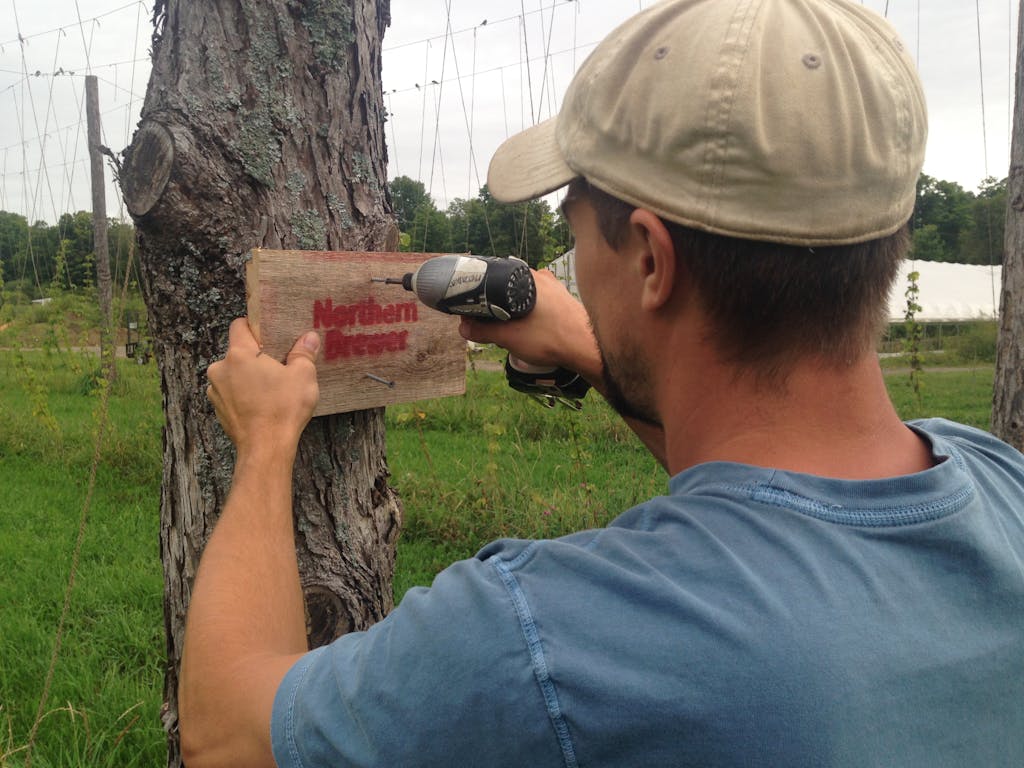 In the week or two leading up to our harvest, the weather had cooled off significantly and the hops were showing all signs of being ready for picking.  The cones began showing some brown on their leaves, the lupulin was a deep orangish yellow, and the aroma pulled your nose through the cone and straight into a pint of beer.  Then came the week of harvest.  Unbearable heat and humidity, followed by torrential downpour, more cold, and then a mashup of each.  The hops did not even know what to do.  Fresh shoots began sprouting out of the ground, side shoots rocketed off of the bines, and some new cones even started to appear! Despite the temptation, we would not be able to wait for those cones to mature as it would spoil the rest of the harvest.

Early Saturday morning, just hours before the hop harvest festival was set to begin, a thick fog blanketed the hop yard and the fear of rain cast a shadow on the day. 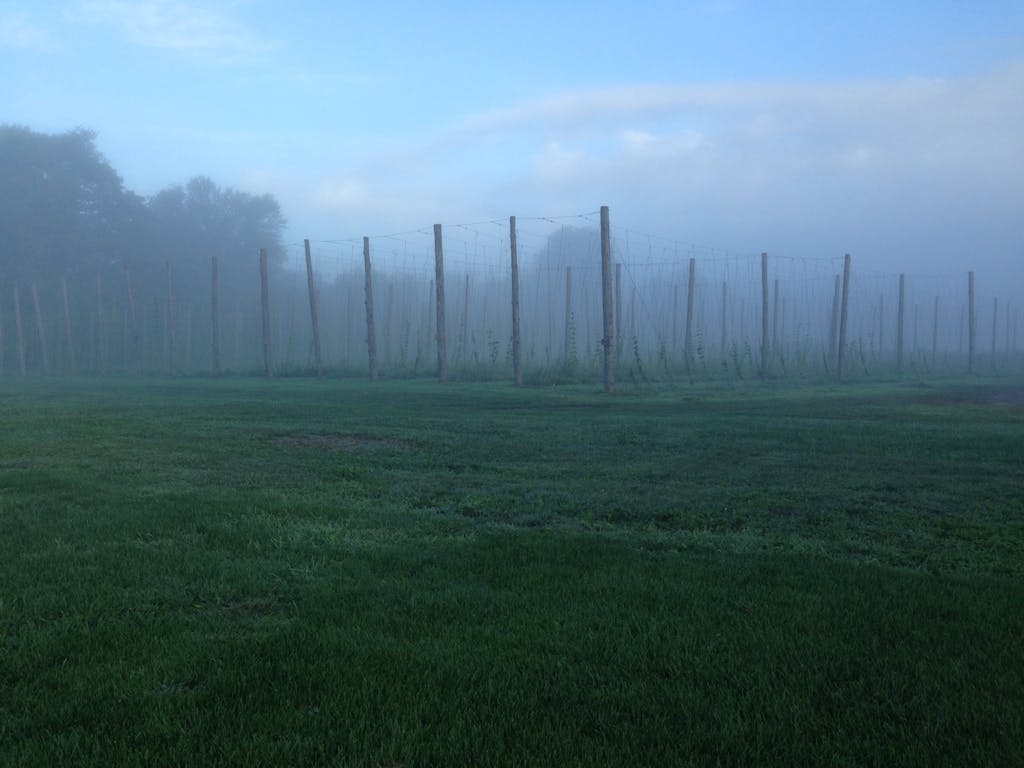 With no other choice, we not only had to make final preparations for harvest  but set up our regular farm-stand at the New Milford Farmer’s Market, and make two holiday weekend sized deliveries of our pasture raised chickens and eggs to neighboring farms and grocery stores for their weekend sales.   By the time the deliveries ended, the weather had cleared and the fog was replaced by palpable excitement.

Soon enough our volunteers began showing up, and the picking was ready to begin. During the week, we had harvested two of our six varieties as they were showing signs of over ripening.  The practice runs were invaluable and with more than fifty people showing up at the farm, we had the process down to a science and in six or seven hours, to the sounds of bluegrass we were able to take down, pick, and prepare the entire yard for drying. 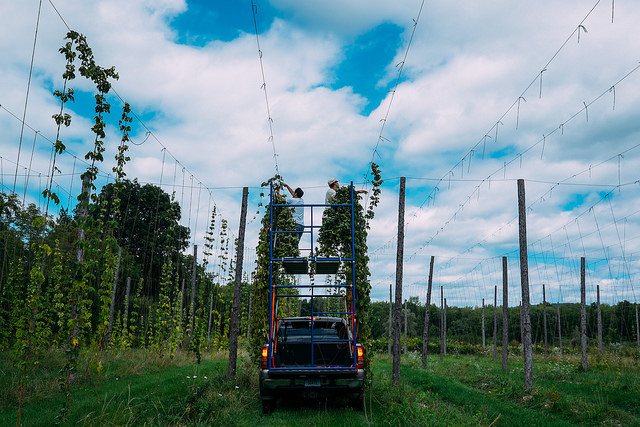 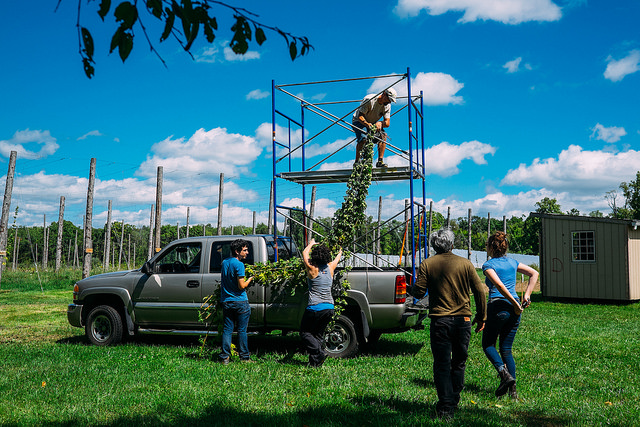 The bine hand offs went smoothly more often than not 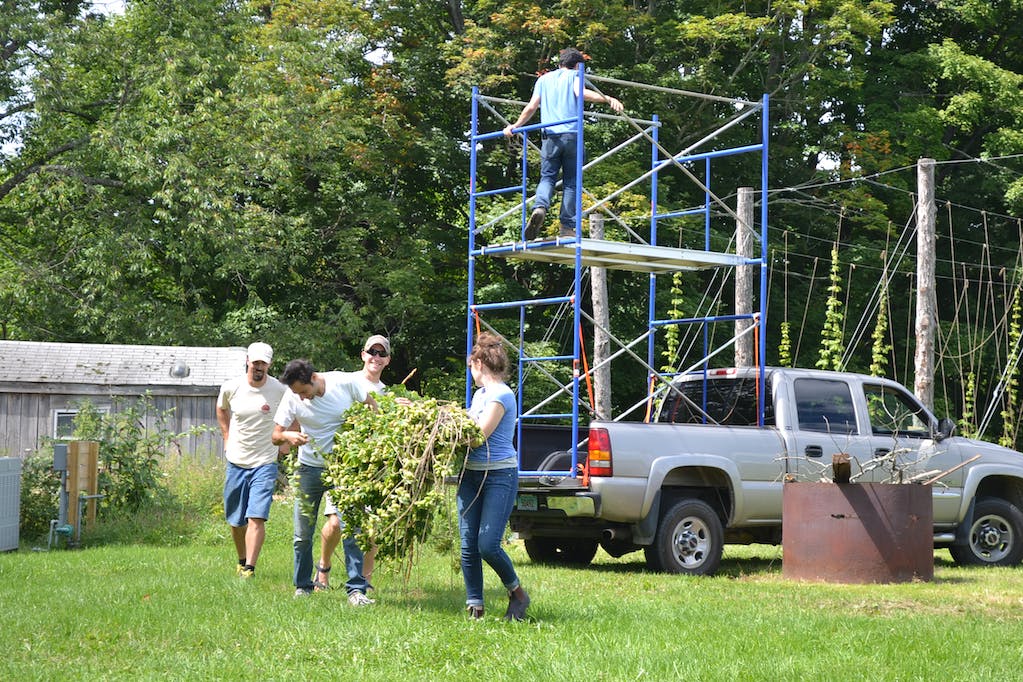 Farmer John, Nick and Noah from Neversink Spirits make sure the bines make it safely to the picking table 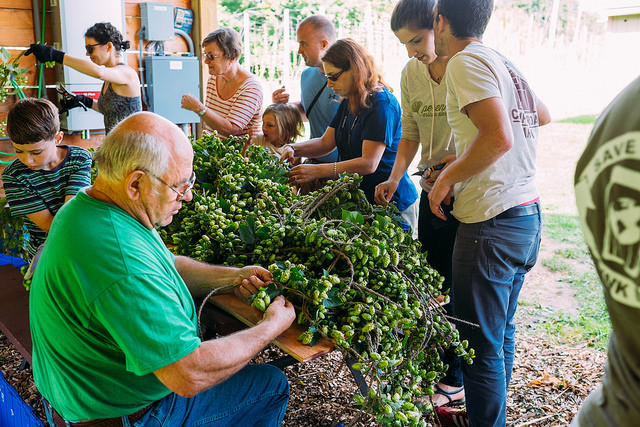 And the picking begins.  Love seeing three generations of Kent helping at the same table! 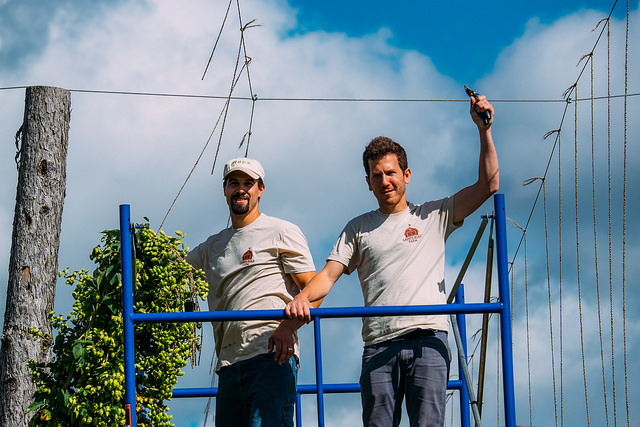 A true farm to fest lunch was served – grilled chickens raised on the farm and vegetables picked that morning for various salads gave everyone the energy and satisfaction to complete the task at hand.  The only thing missing was our own beer.  Between the four varieties over 100 lbs of hops were harvested that we hope to use in our very first batch of beer.

We had people of all ages, coming from near and far (relatively speaking) helping at the event.  Members of the local community who serve on the Planning and Zoning board, neighbors and lifelong residents of Kent Hollow, fellow farmers, Kent Land Trust representatives, grandparents, grandchildren, beer festival promoters, friends from NYC, family from NJ, and volunteers from the area that we had never met before.  It was an overwhelming experience for us to see so many people come and get their hands dirty and take such enjoyment from helping us achieve our  goals.  I’d like to give a special thanks to my parents for coming out from NJ and joining in the festivities, their support is unending and goes a long way.  Check em out! 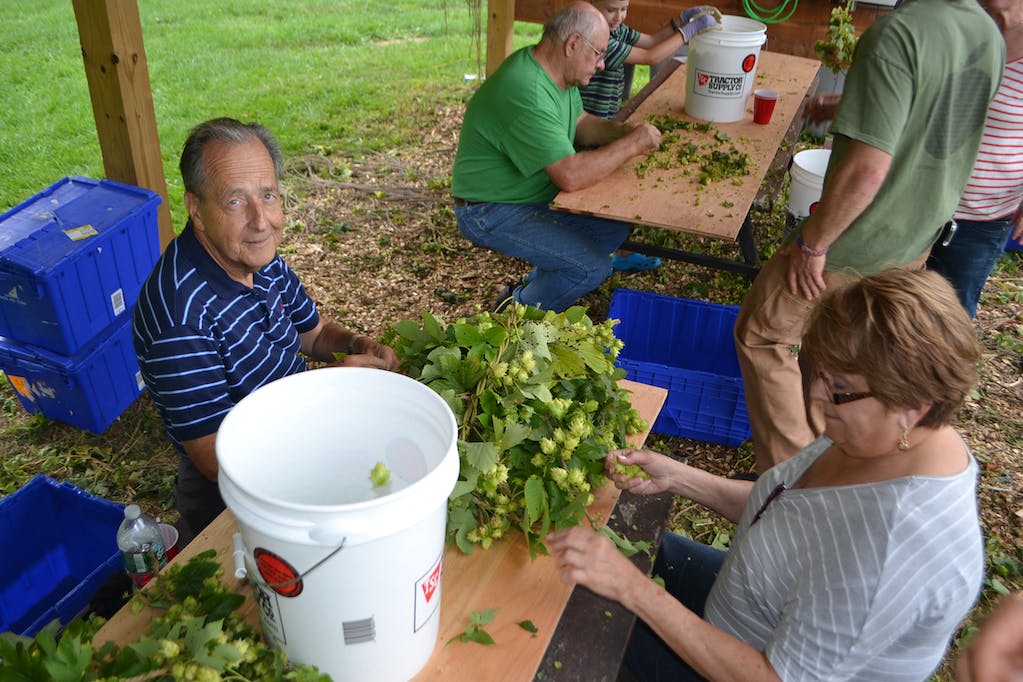 Being our first hop harvest, it was kept relatively small and the invitations sent out to people we know.  Having such a successful and enriching experience under our belt, I can say that I am inexplicably excited for next years harvest to be open to many more people, and have many more hops to pick.  Our goal is to eclipse 1,000 lbs of hops at harvest, so get excited.  We’re going to need your hands! 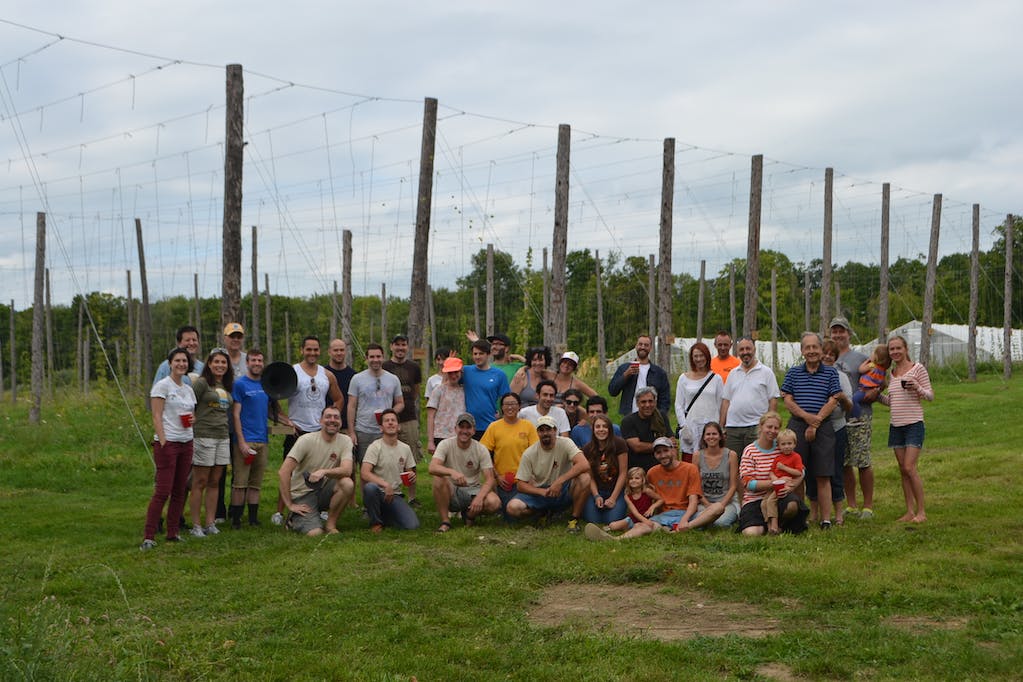 The last of the volunteer crew that hung around to see an empty hop yard.  Many thanks!

See you next year!