To say the least, it was a very eventful summer.

Writing about each event in detail was a challenge, but with Autumn here and things winding down for the season on the farm (don’t worry the brewery will keep humming along) we are going to make a rededicated effort to share our thoughts, and the stories surrounding what we produce. For now, here are some highlights of the past four months. We hope you enjoy it as much as we did.

After nearly 2.5 years of operation, we finally opened up our tasting room; creating a physical space for the community that we have been working to cultivate from the first day we moved onto the farm. 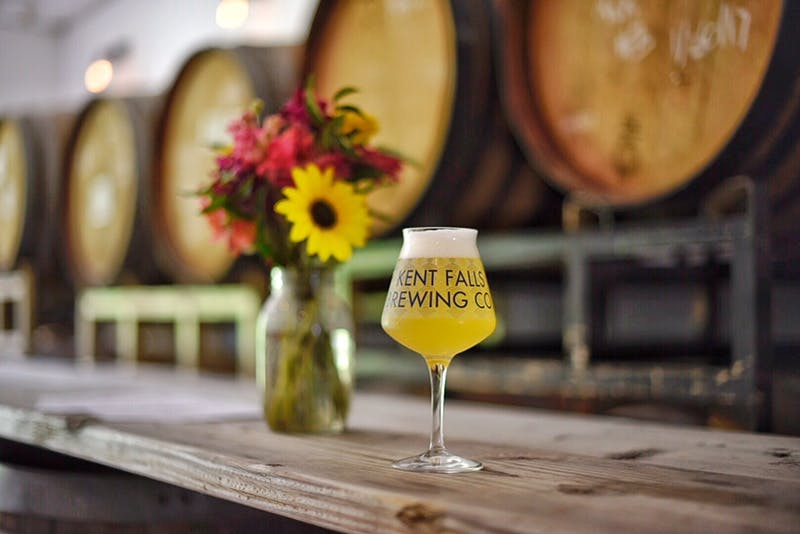 Opening up the tasting room was certainly a journey. Physically transforming a defunct dairy barn into a permitted tasting room is no small challenge. Making that transition understandable but not apparent is equally important. One of the most moving moments was to see our tap handles, which were used as part of a chain in the dairy operation, find new purpose in their old home. 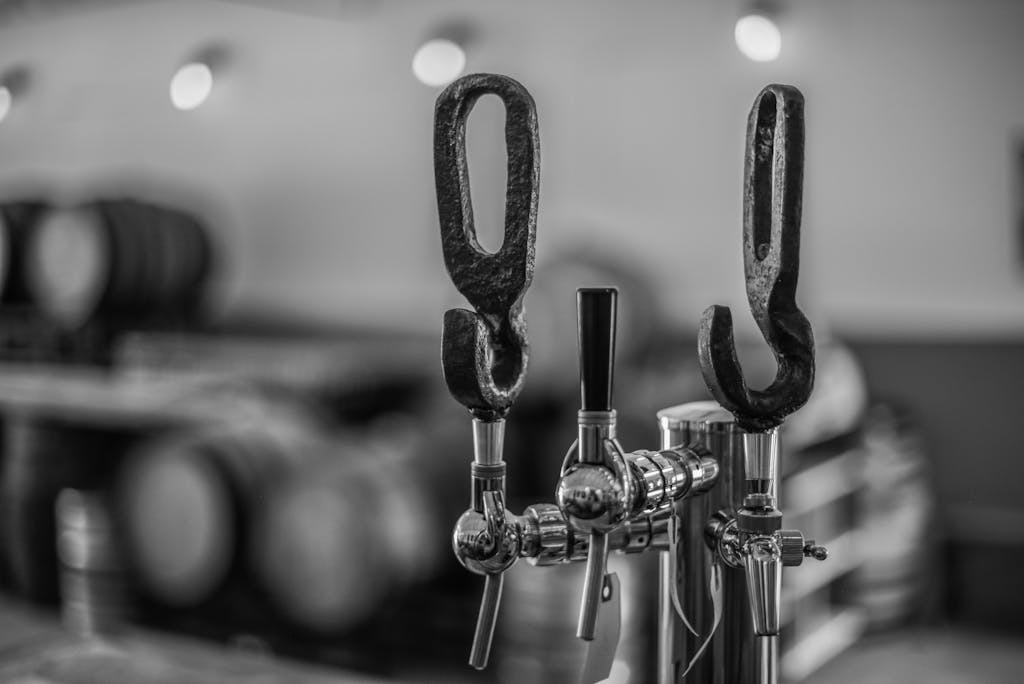 Not two weeks after the tasting room opened Derek and I made their way to Amsterdam to take part in the 6th annual Carnival Brettanomyces; a wild fermentation festival that goes well beyond beer. Derek got the chance to speak to a crowd of brewers, bakers, and wild fermenter about his experiences surrounding his book, The Fermented Man. 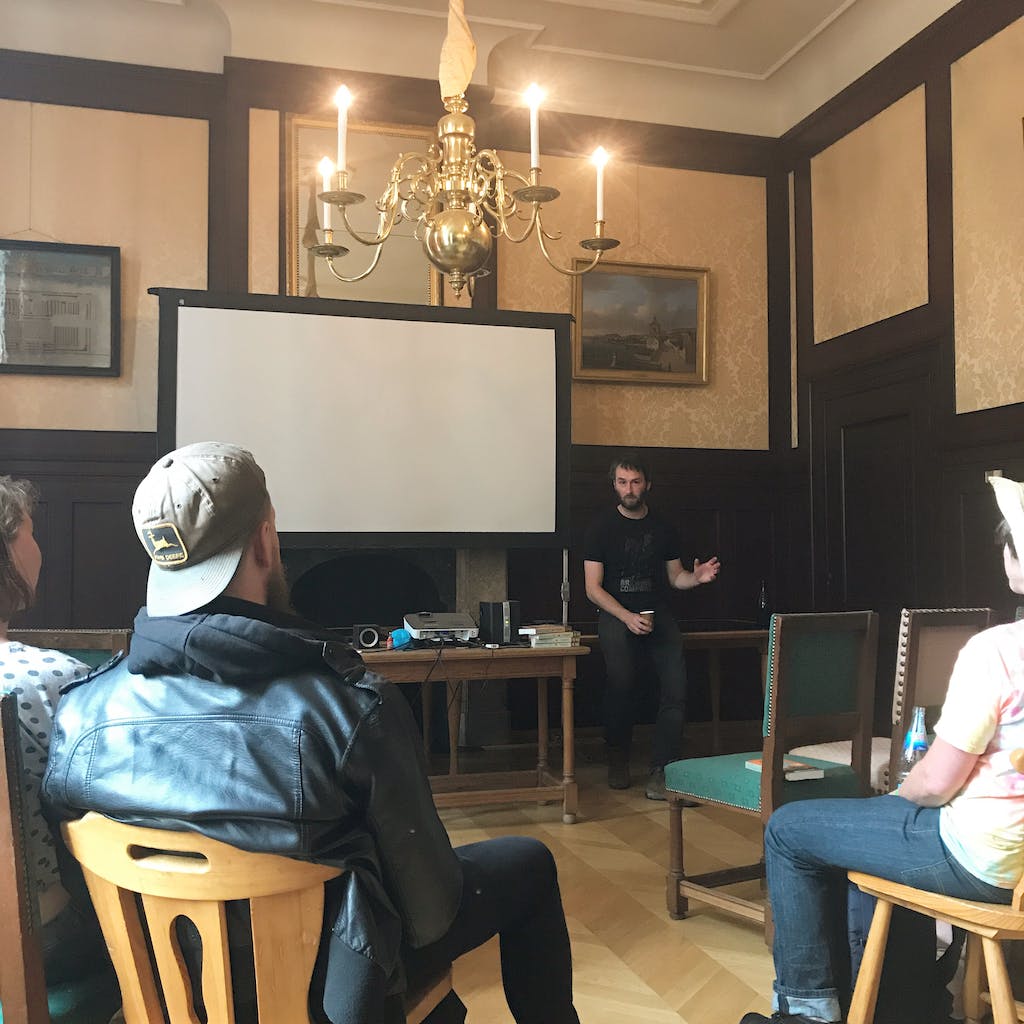 Spending nearly a week getting to know brewers from England, Russia, the Netherlands, and many other countries not to mention we finally met up with Phil Markowski.  Our participation in the festival would not have been complete without pouring Jan, the organizer his first bourbon. Once that was squared away, we were safe to return home and get back to work. 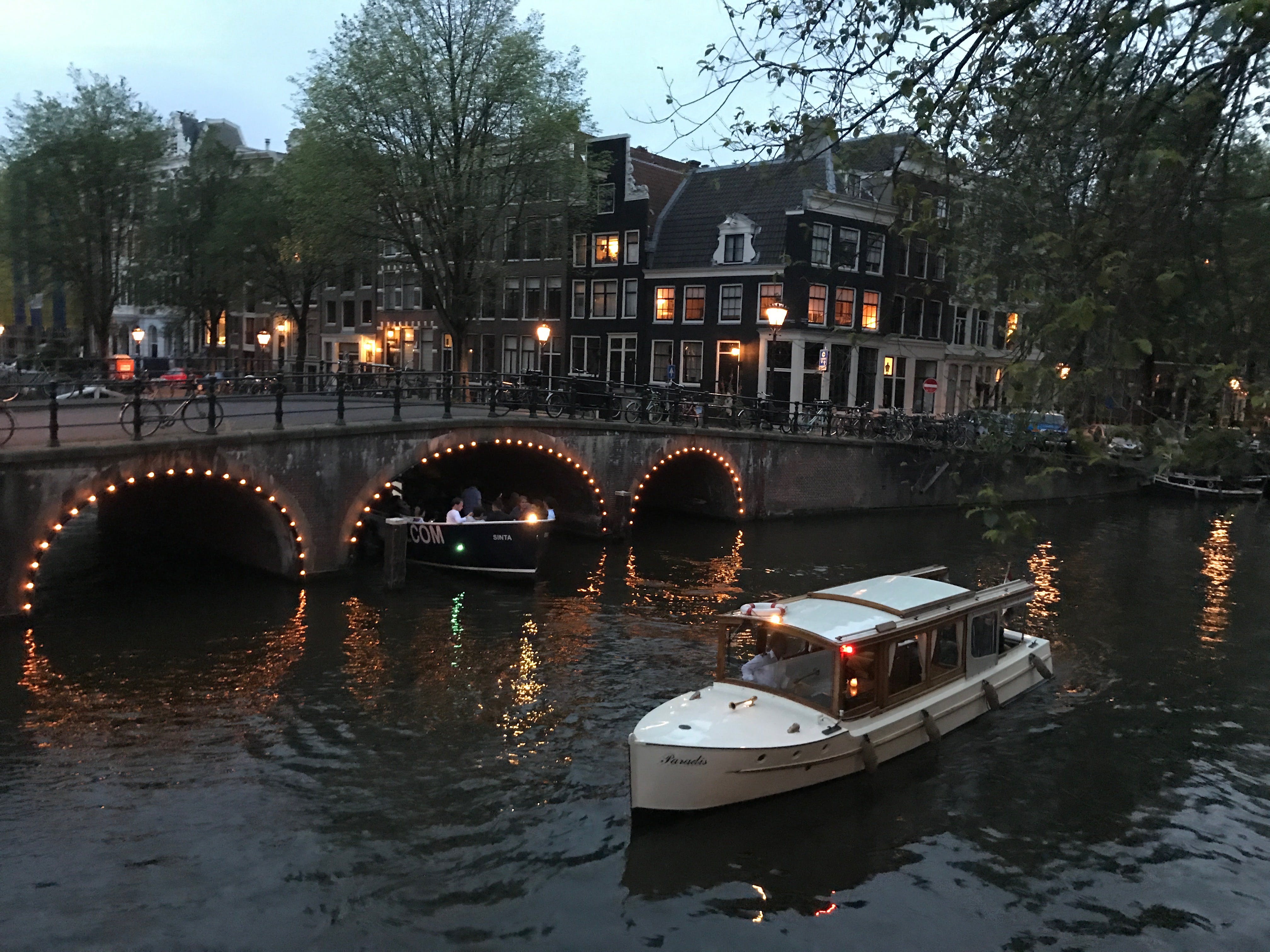 In order to connect with people off the farm as well as we are able to in our tasting room required some much needed renovation of a different kind.  So after coming back from Amsterdam we launched our new website (and continue ignoring the blog). If you haven’t had a chance to explore it there are plenty of neat features. A fresh background on who we are and what we do, a searchable beer database with ingredients, process and batch information, new galleries, integrated social media, a dedicated page for our tasting room hours and offerings as well as a renovated online store for merchandise and beer pre-sales. 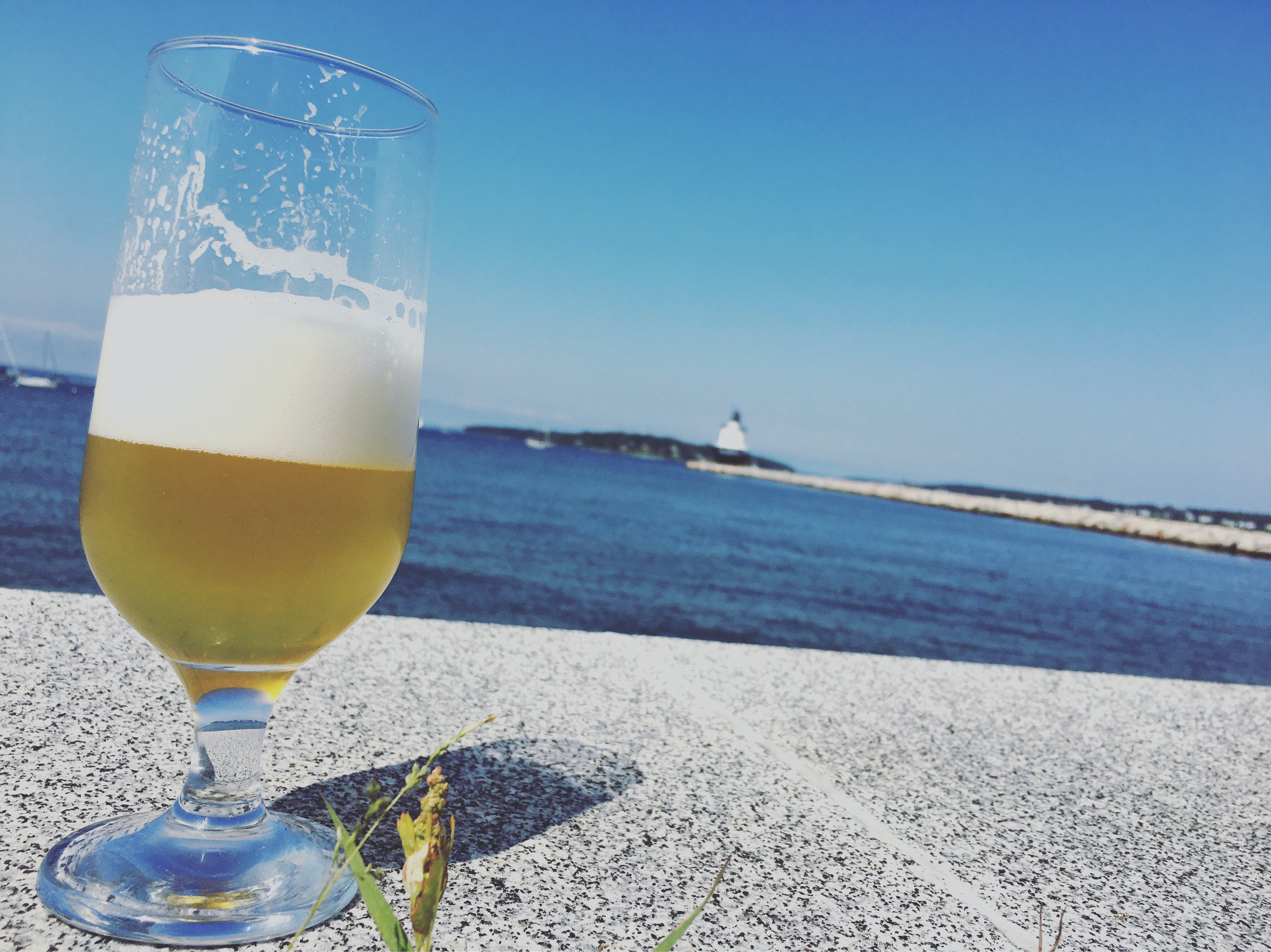 Speaking of positive experiences… in July we were honored to be invited up to Maine to pour beer at Oxbow’s Pils and Love festival. A perfectly curated environment to talk with friends new and old in a picturesque setting… with a glass of world class lager.

Next up, the collaborations! 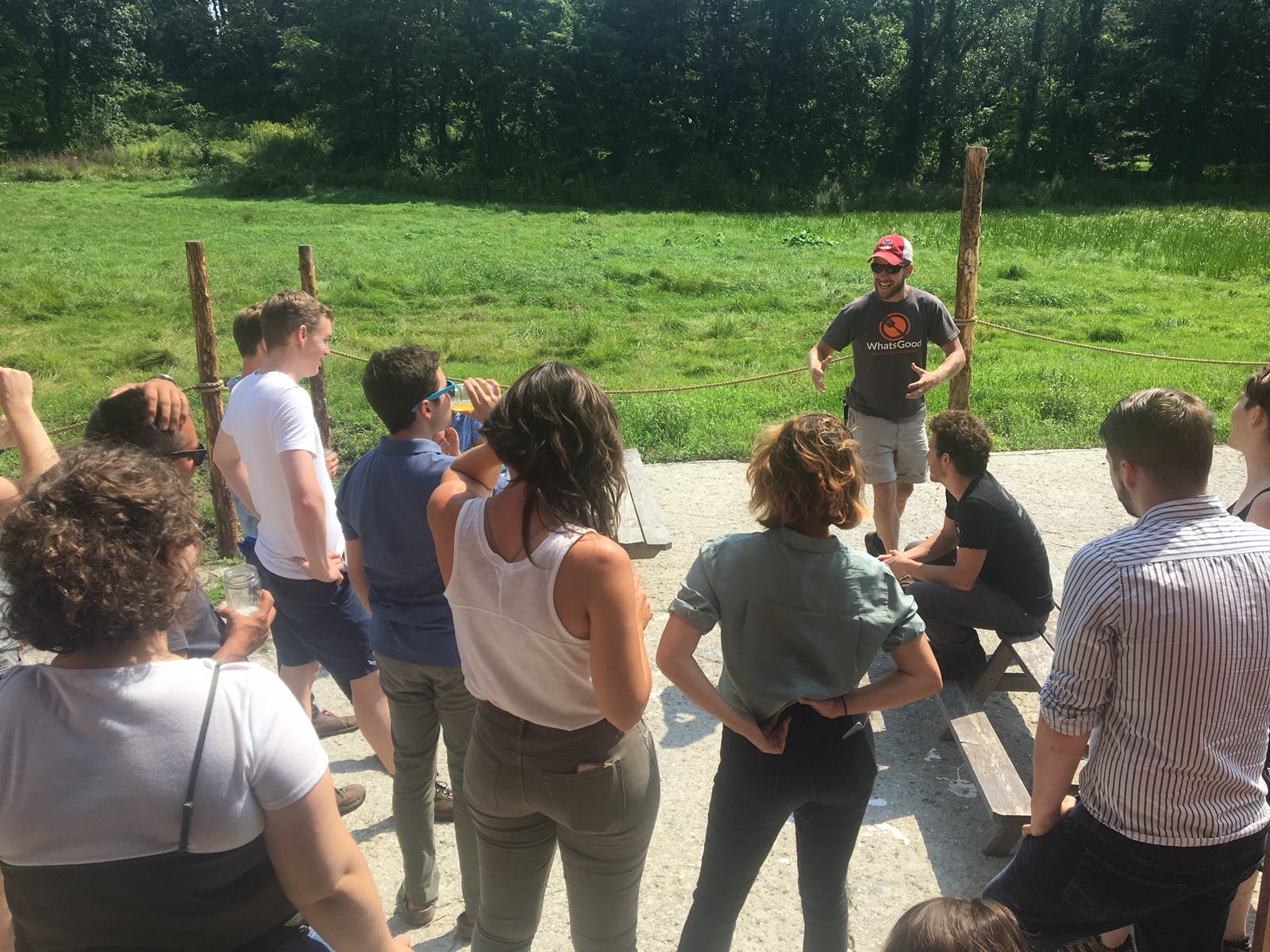 Dan Barber’s book The Third Plate has been a major source of inspiration since before the brewery opened. It is a unique and honest attempt to answer how we can positively impact our environment, food system and culture through flavor. In August, his staff made their way to the brewery and we turned a long discussed collaboration into reality. And got the opportunity to geek out together on a farm tour.

One of the best beers we had the chance to try in Amsterdam was a kvass brewed by Dmitry from Baltic Bay Brewery in St Petersburg Russia. Much of Chef Barber’s work focuses on grains; wheat in particular. The initial idea for the collaboration was to brew a kvass and replace rye bread with their house loaf, which should produce a lighter less caramelized character in the beer; and speak to a shared focus.  Borrowing pieces of a traditional method we learned from speaking with Dmitry; the break was baked with malted barley added into the dough to aid enzymatic reactions in the brewing process.

The beer was fermented with a blend of our house cultures; ours a wild yeast harvested from our farm and theirs a sourdough starter from their bakery. The result is tremendously pleasing. A light 3% alcohol table beer with a maturity beyond its age, soft fruit forward acidity with the perception of a slightly larger more filling beer. The beer was called Breaking Bread, a time when food and conversation should go hand in hand.

Each year in early September we host a hop harvest and pig roast where we brew Tiny House, our mixed fermentation harvest ale. This year, our fourth harvest would be our first festival with the tasting room open, and the excitement that day was palpable. We poured the previous year’s batch of Tiny House along with Partage, a new hyper-local table beer brewed with local malted barley, raw wheat, aged hops from our farm, and our native farm yeast. The beer was packaged in green bottles to allow a soft light stricken funk to develop and complement the aged hops and fermentation character. A beer perfectly suited for sharing with friends in any setting.

To help us celebrate, we invited our friend Eric from Casa Agria in Oxnard, CA to the farm to make a couple of beers before the harvest festivities officially began. First up was Send It!, an IPA full of Citra and Galaxy hops along with local wildflower honey. But you’d have to be silly to think that was all we would brew. The second beer (to be released in 2018) is a wheat farmhouse ale fermented in wine barrels with a blend of both brewery’s mixed cultures. 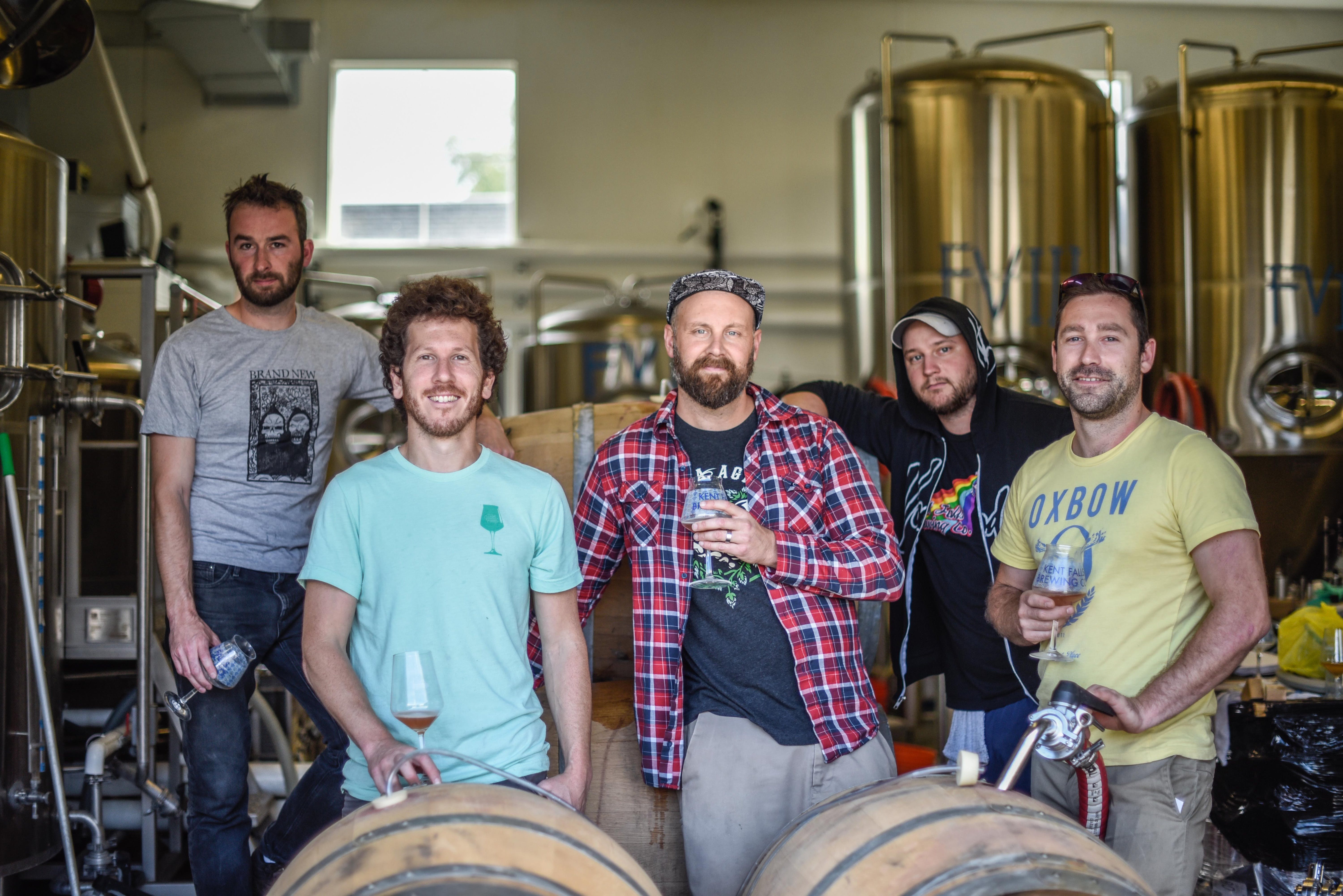 Back to the harvest! 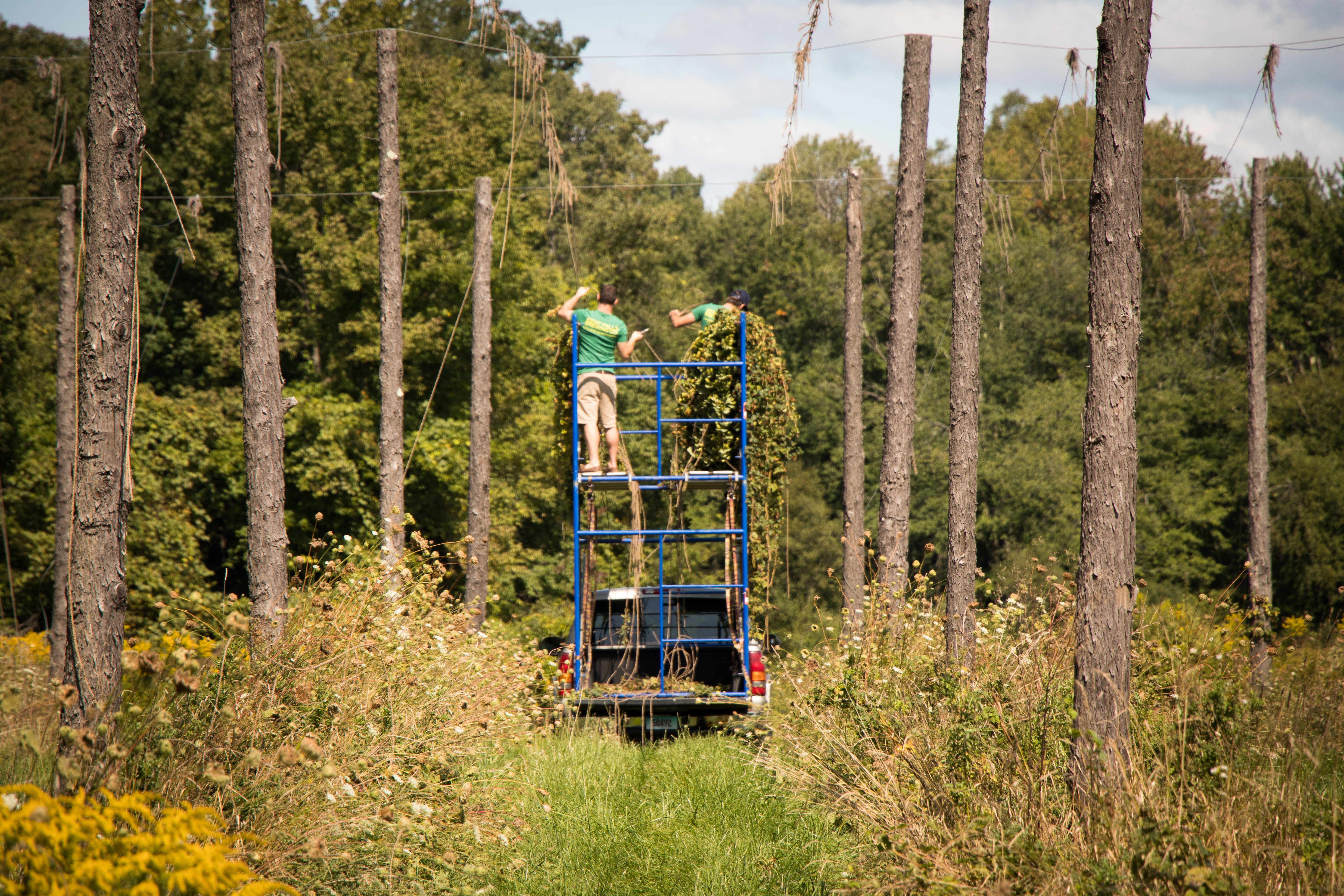 Rob and Ralph leading the harvest of our Brewers Gold hops. 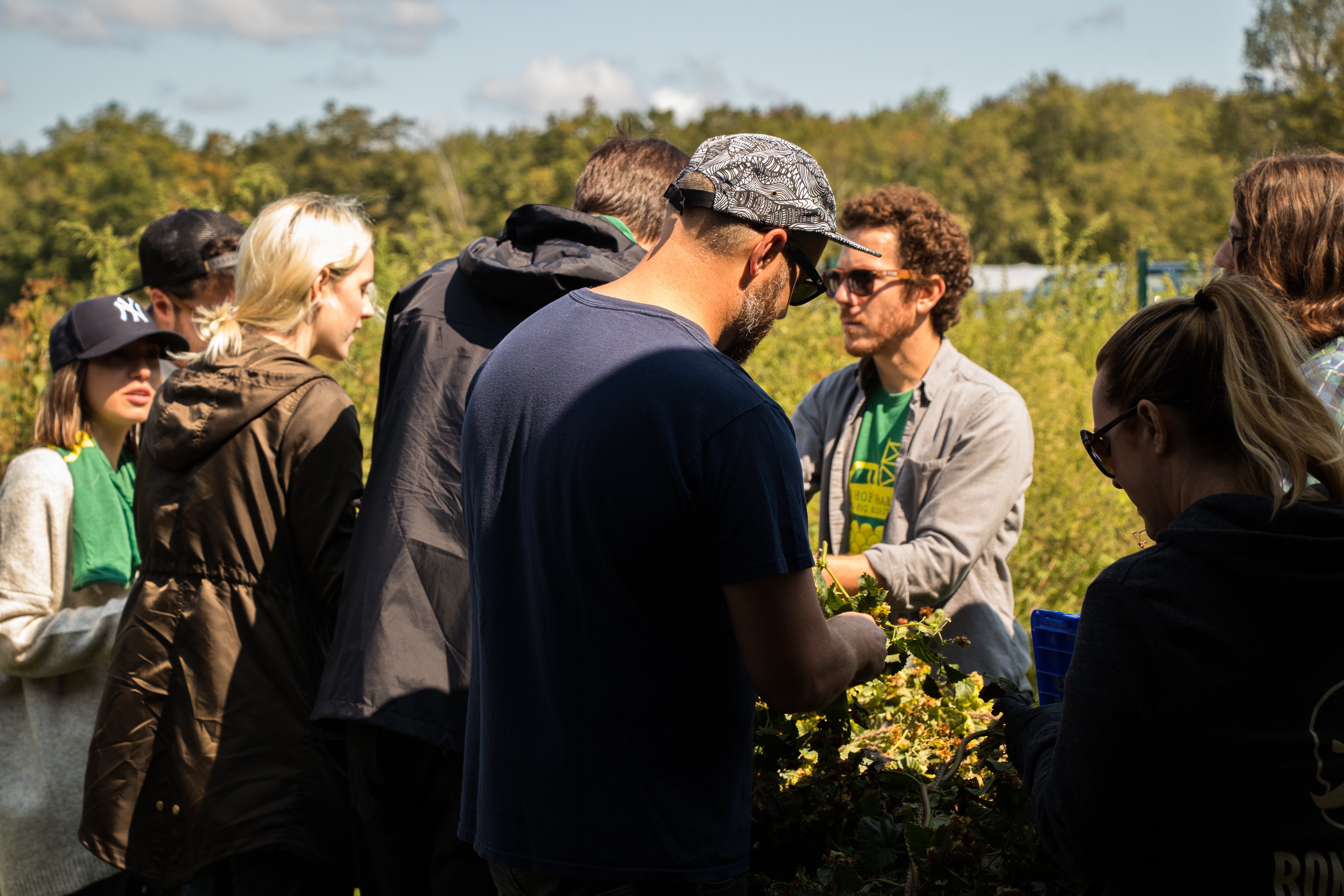 Barry, Eric and friends getting that lupulin 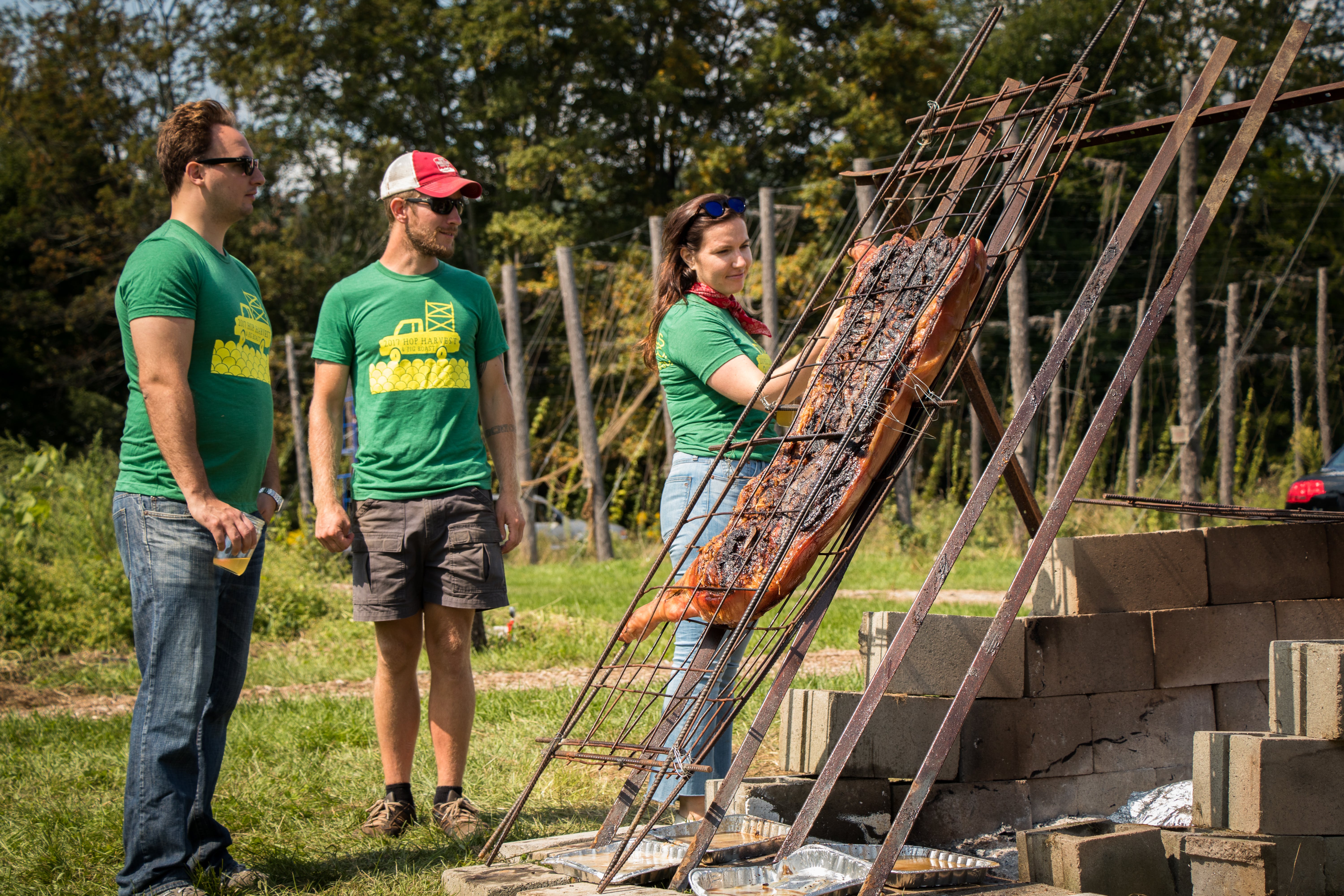 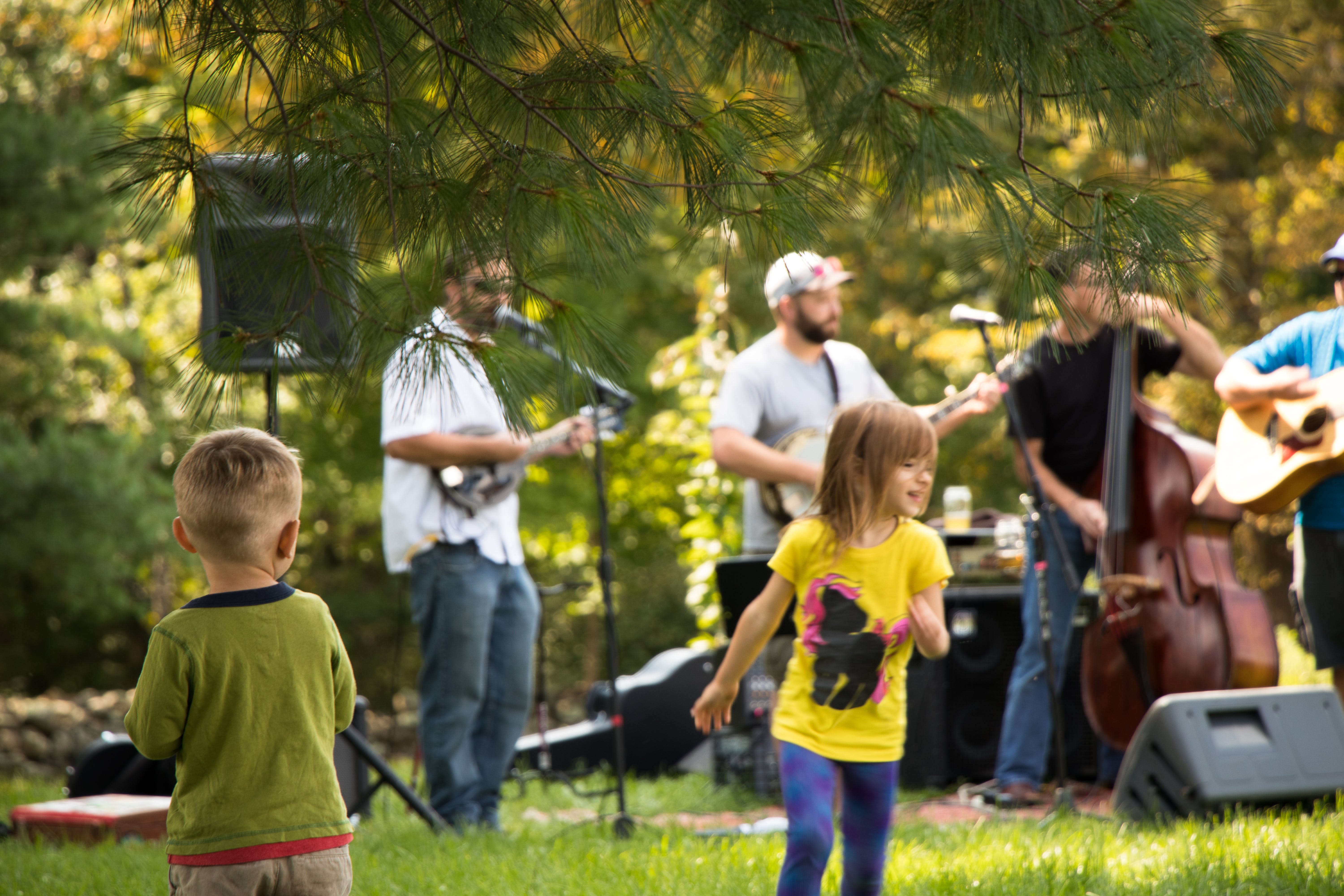 Every batch of Tiny House helps tell the story of a particular year on the farm. How many hops did the yard yield? How does seasonal variance and hopping rates affect the character of the beer? This year with the buildout of our tasting room and half the yard replanted the previous fall we had a smaller harvest than years past, which could help produce acidity in the beer as it ages. Equally important, it is a reminder to us that every beer is connected. As we continue to grow as people, farmers, and brewers we learn from each repetition of our process, and incorporate that knowledge of failure and success, small and large into the next; asking ourselves what we want the next chapter of the story to be.

This year’s batch is almost exclusively packaged and conditioned in green bottles. Some of them very large, green bottles. Look for release info toward the end of 2017 or early 2018. 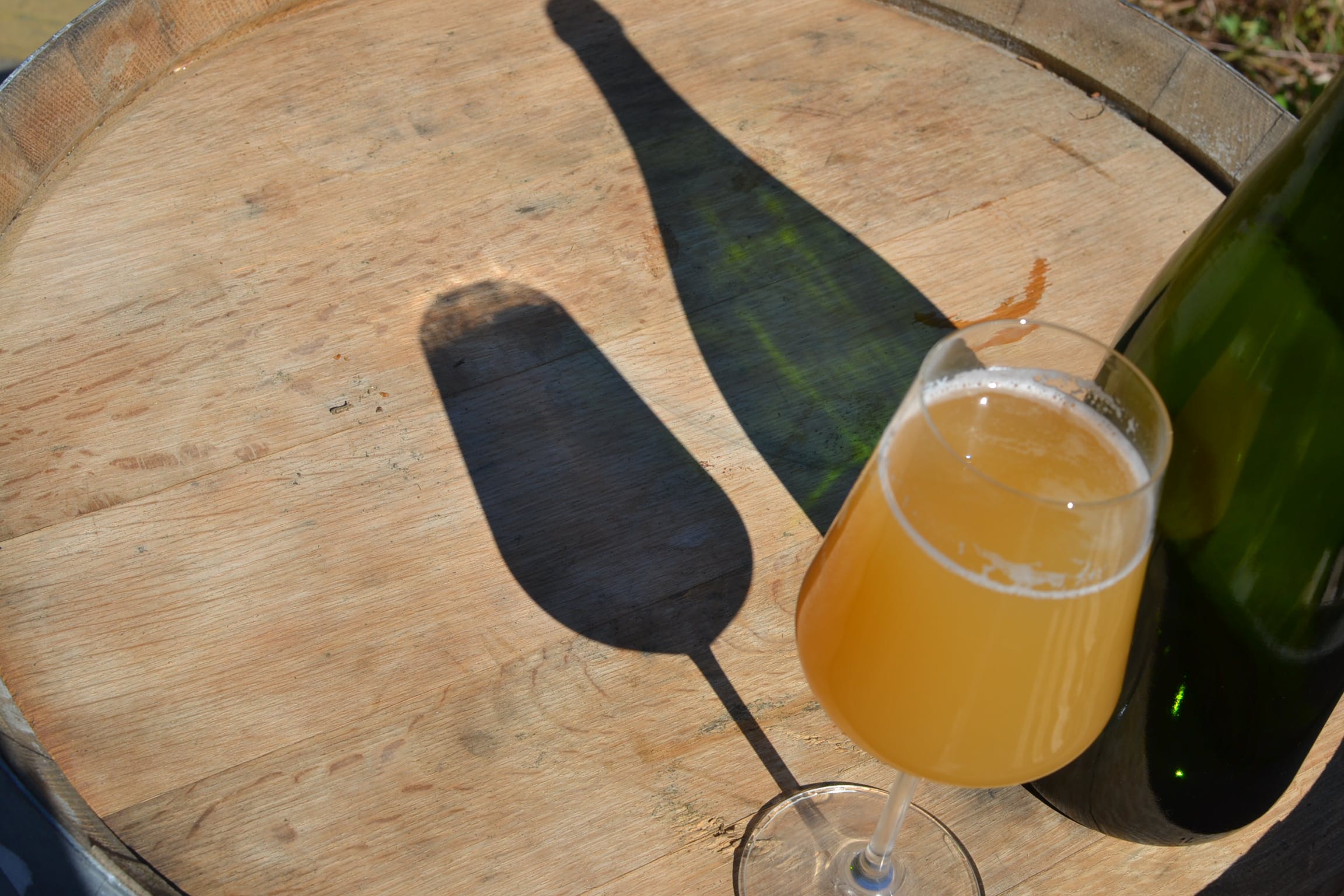 The very next weekend we released our second batch of Nature, a blend of farmhouse ales fermented in stainless and aged in wine barrels for one year. This was the first re-release of any barrel aged beers from our brewery. Bottled for it’s taste and potential but with no clear identity at the time, the experience of opening an unlabeled bottle during conditioning and having it’s nature immediately evident is an extremely gratifying experience. A beer that tells us what it is and when it is ready instead of the usually reversed set of roles. 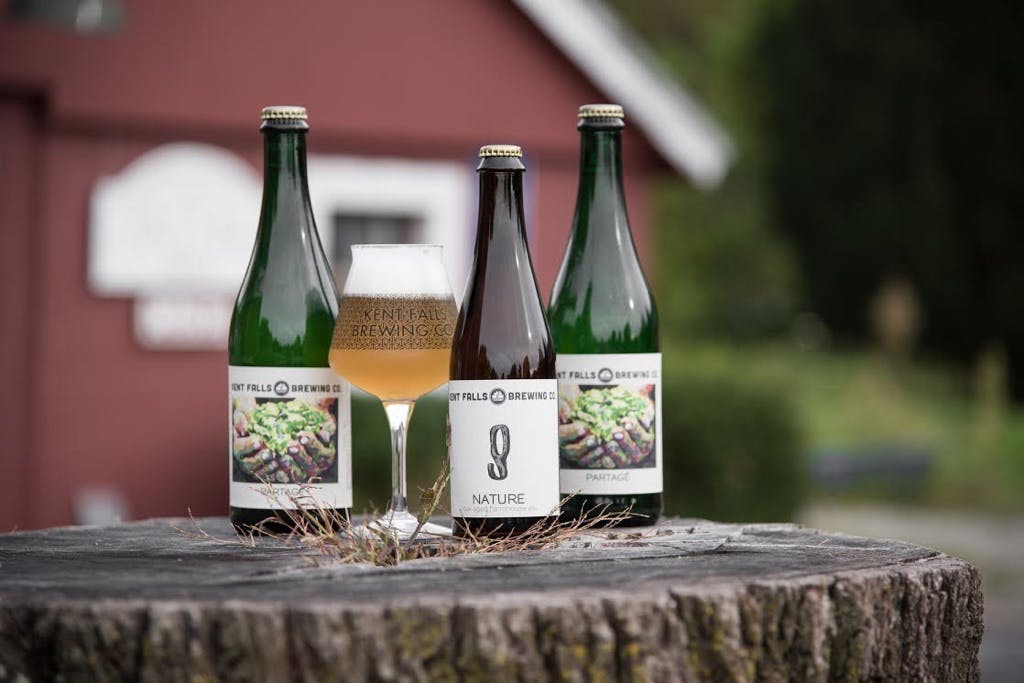 With the hops all picked John, Kate and Buddy Sprinkles turned their attention to Sumac, another plant growing abundantly around our farm. Picking and cleaning sumac cones is a fairly simple but painstakingly slow task. Thankfully we had enough time to gather the 75 lb of it before Dmitry and Evgenia from Baltic Bay Wild Ales arrived at the farm to incorporate it into one of our collaboration beers. 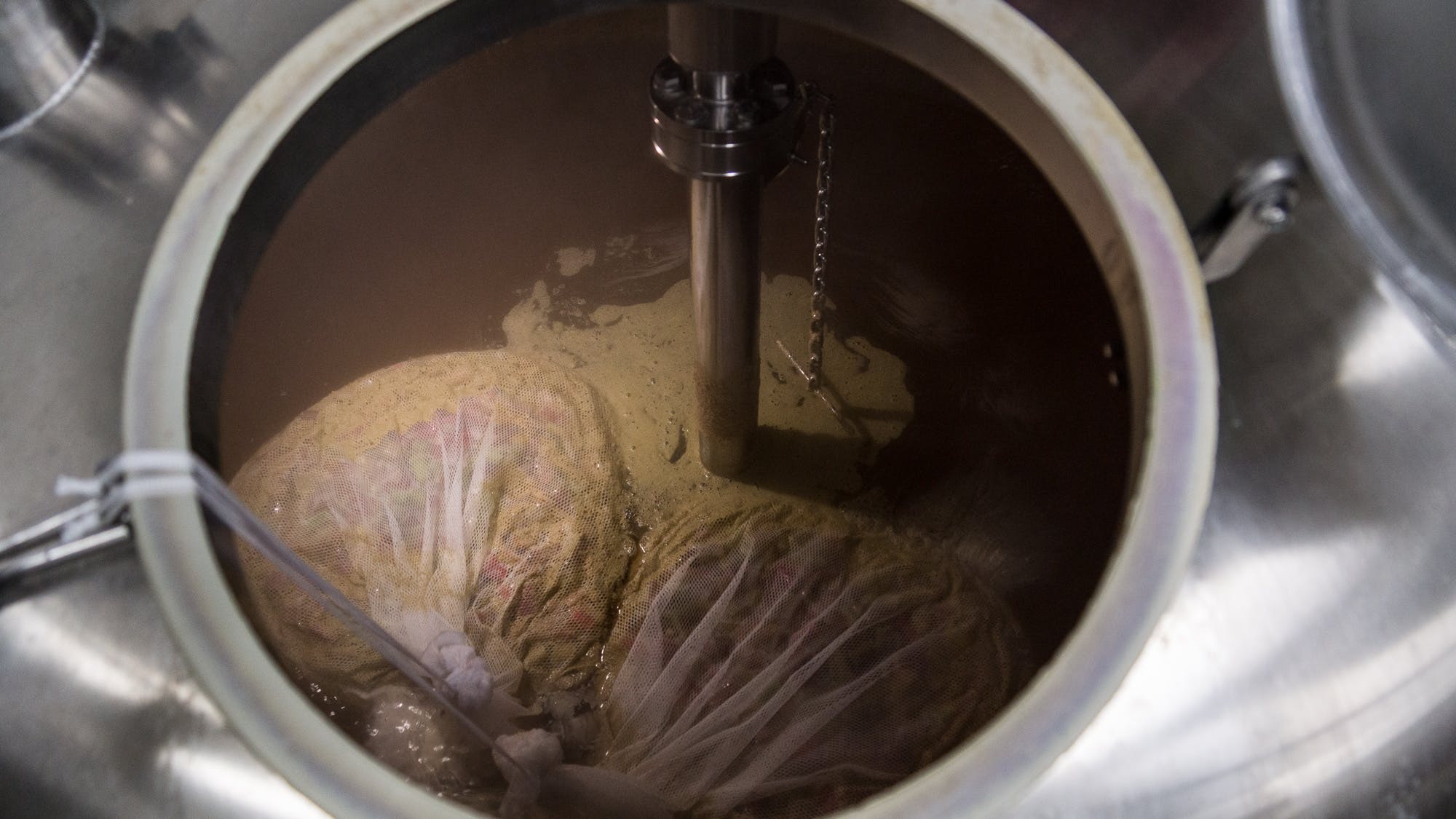 The first of our Baltic Bay collaborations. A farmhouse ale brewed with local rhubarb, sumac, and blended with a farmhouse ale aged in wine barrels with native cultures. 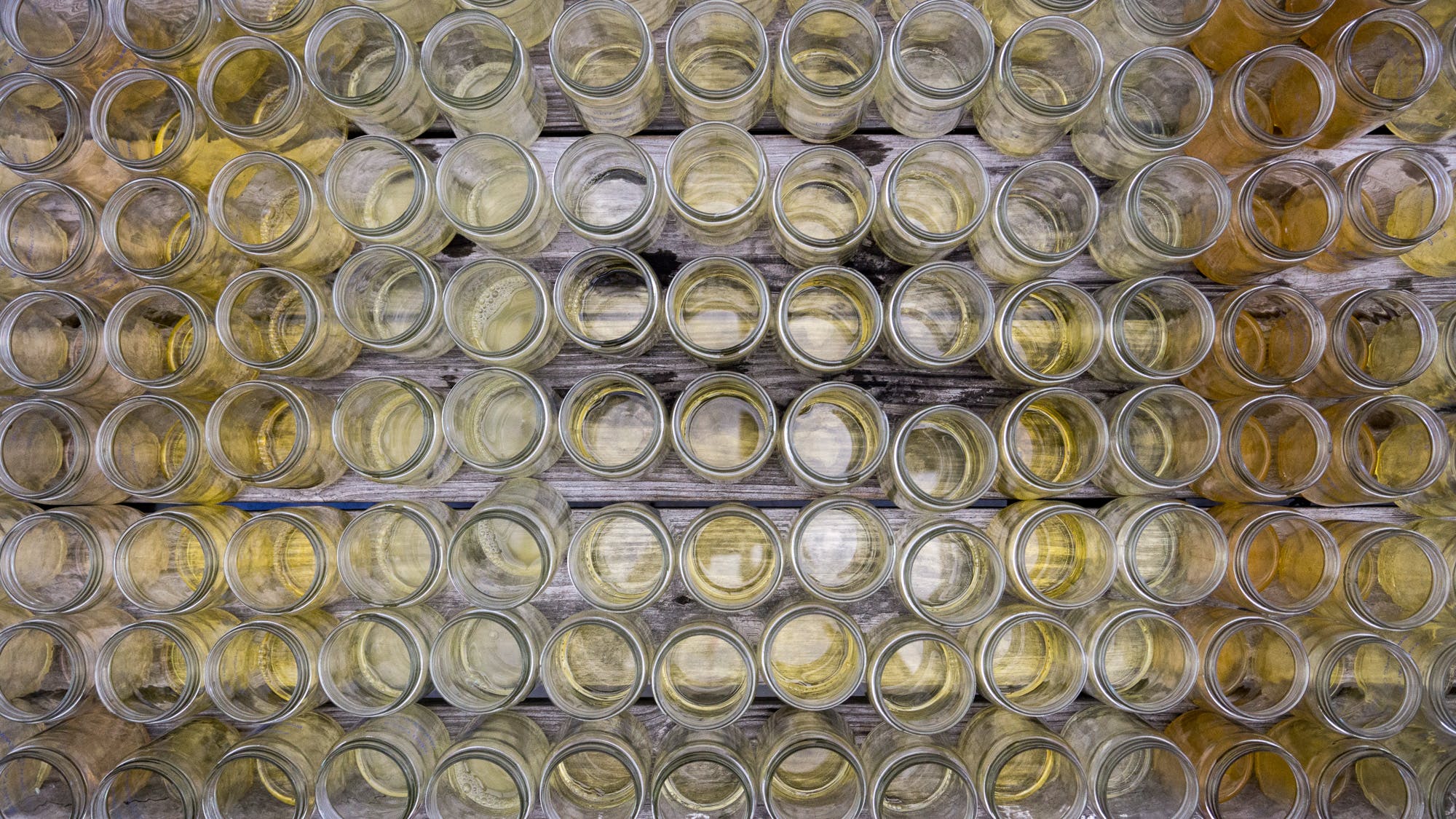 Picking the right barrel is as tasty as it is pretty. 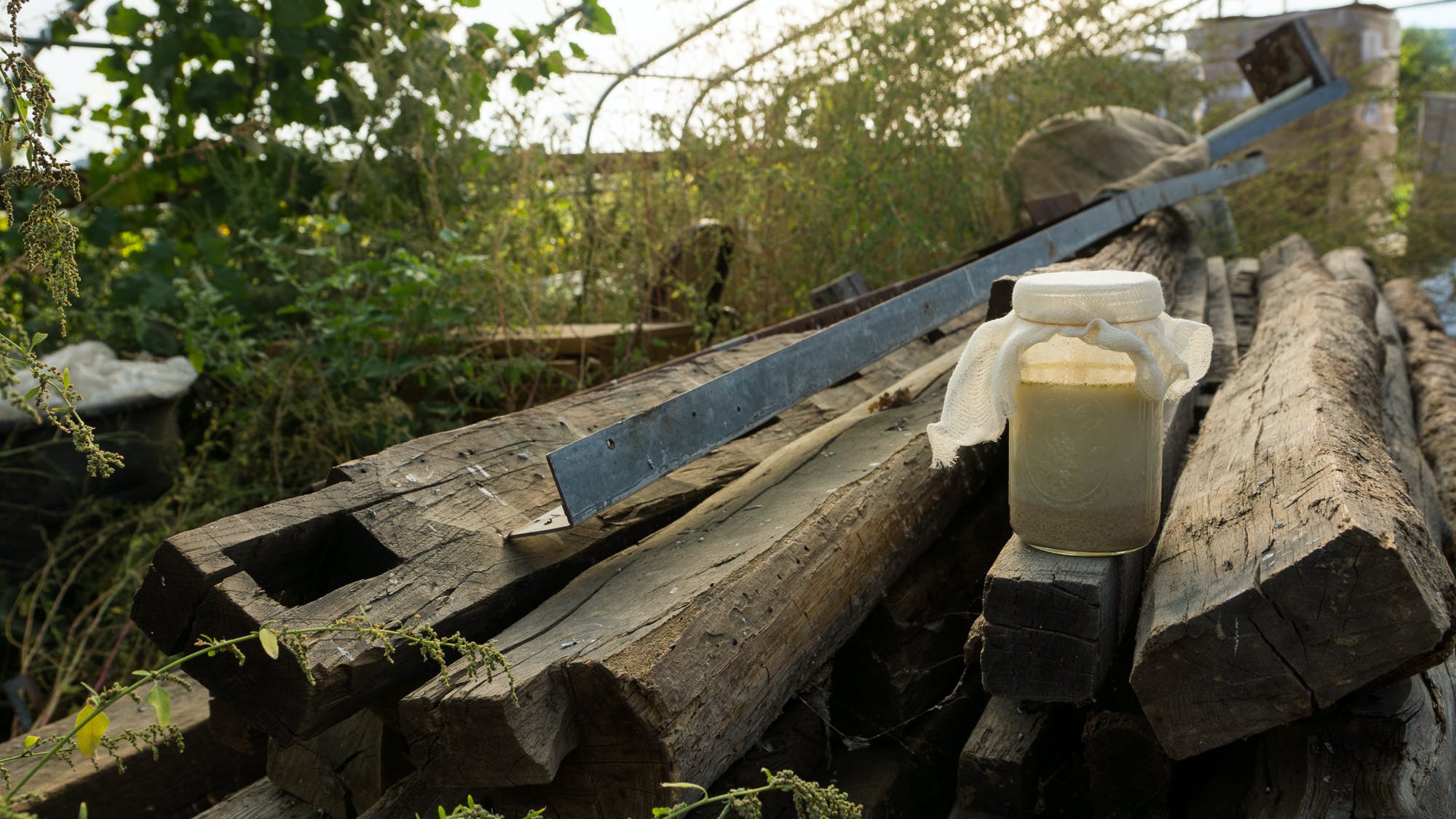 For our second (and third) beers we brewed a farmhouse ale with malted barley, spelt and raw rye that would be fermented with mixed cultures. Some of these wild cultures were collected overnight using an old Russian method of capturing wild yeast. A starter is made from water and finely ground malted barley with a small addition of hops and a clear spirit to prevent bacteria and only encourage brett. These samples were placed around our farm and let rest overnight; the location pictured above is in the greenhouse resting upon American Chestnut that came from the original farmhouse and barn. These wild cultures were used to inoculate and ferment one barrels worth of wort. 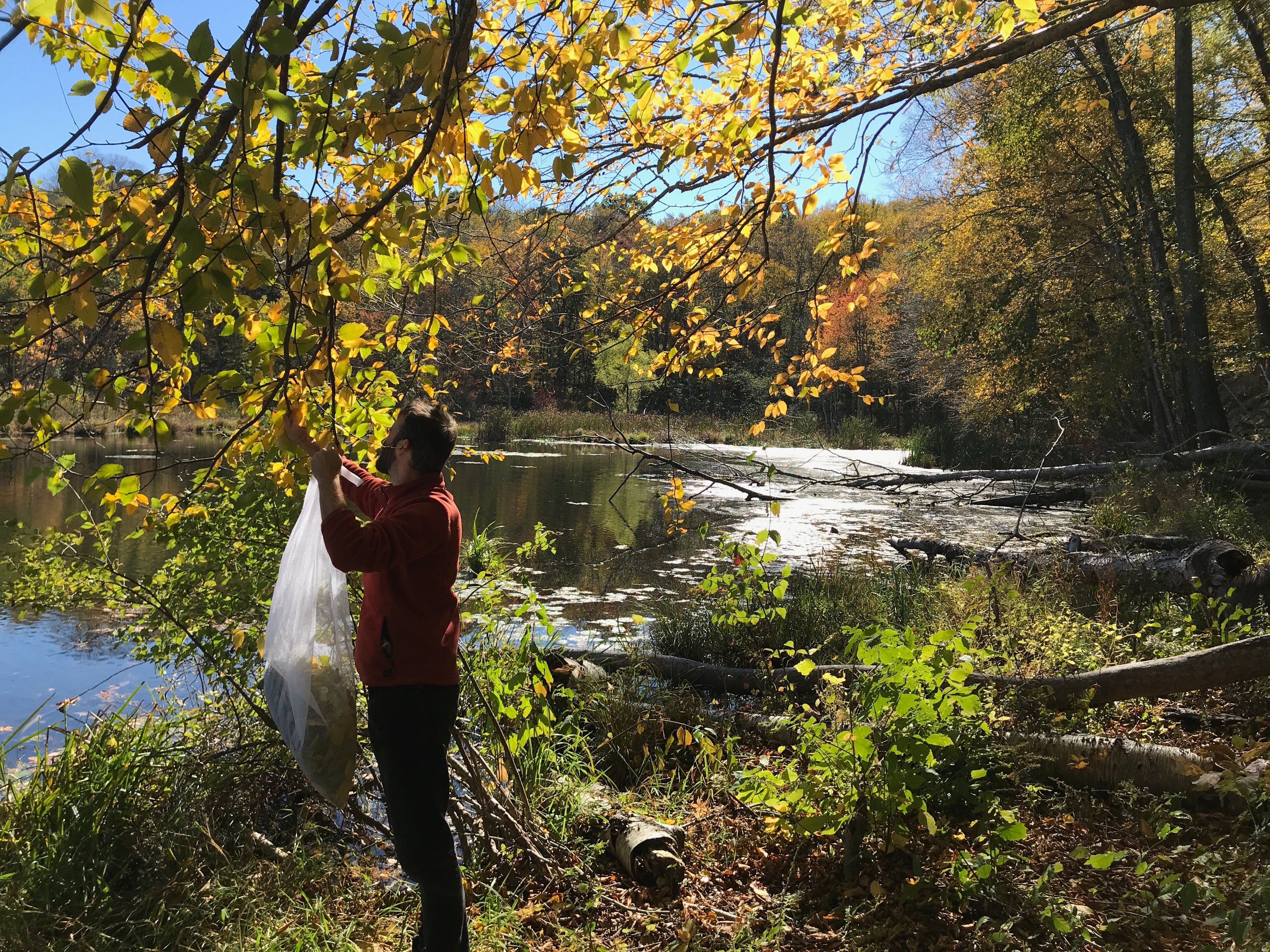 The rest of the batch has been fermented in stainless steel with the addition of chardonnay grapes and birch leaves. 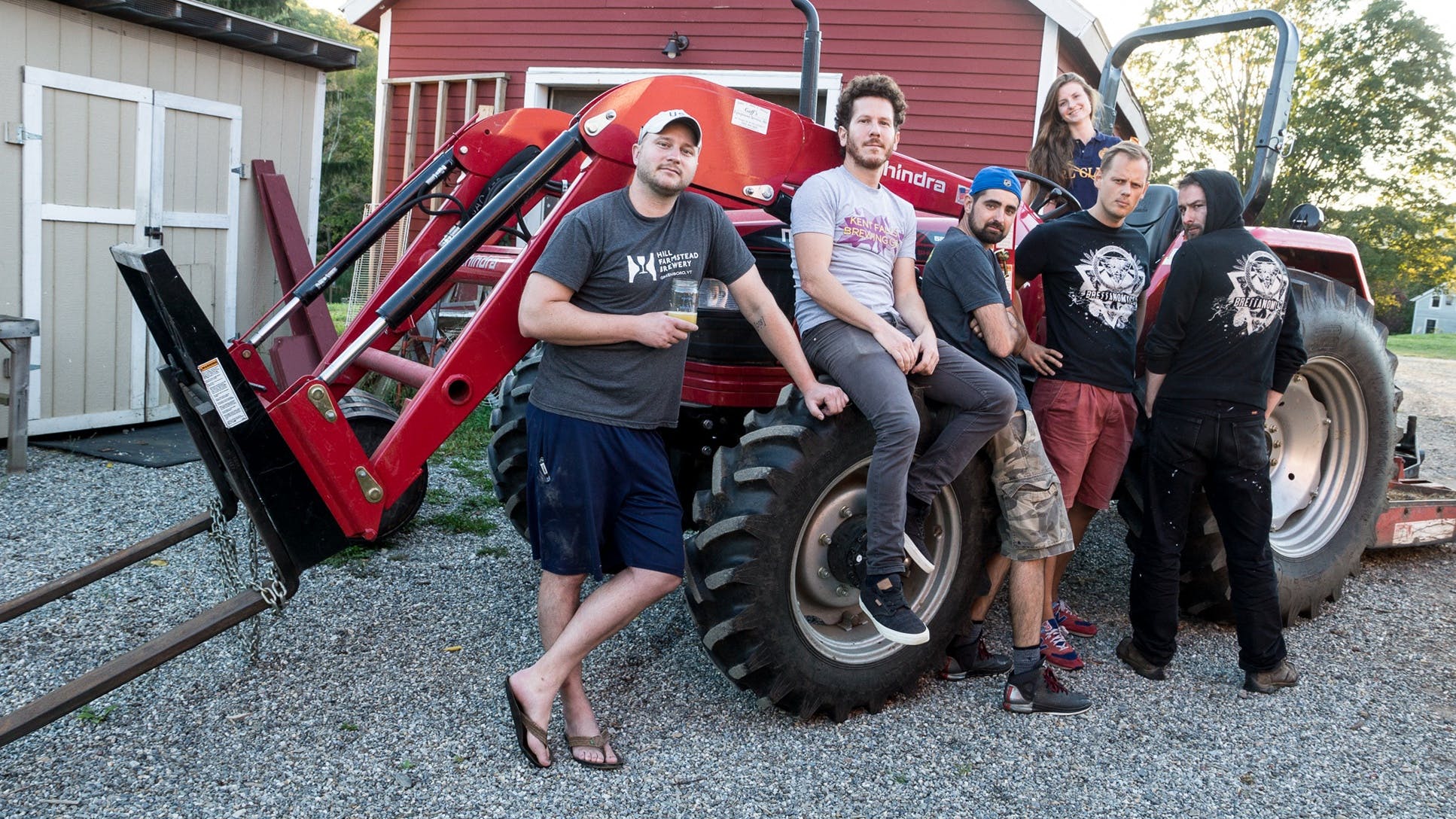 If you are still reading this, you probably know that we release a fair amount of IPAs on a regular basis. We have always and will always like to have fun with our IPAs. Super Sparkle gave way to Glitter Rainbow. Once The Unicorns started Making Us Do This we couldn’t stop. Which meant only one thing. Buddy Sprinkles had to Save The Day. 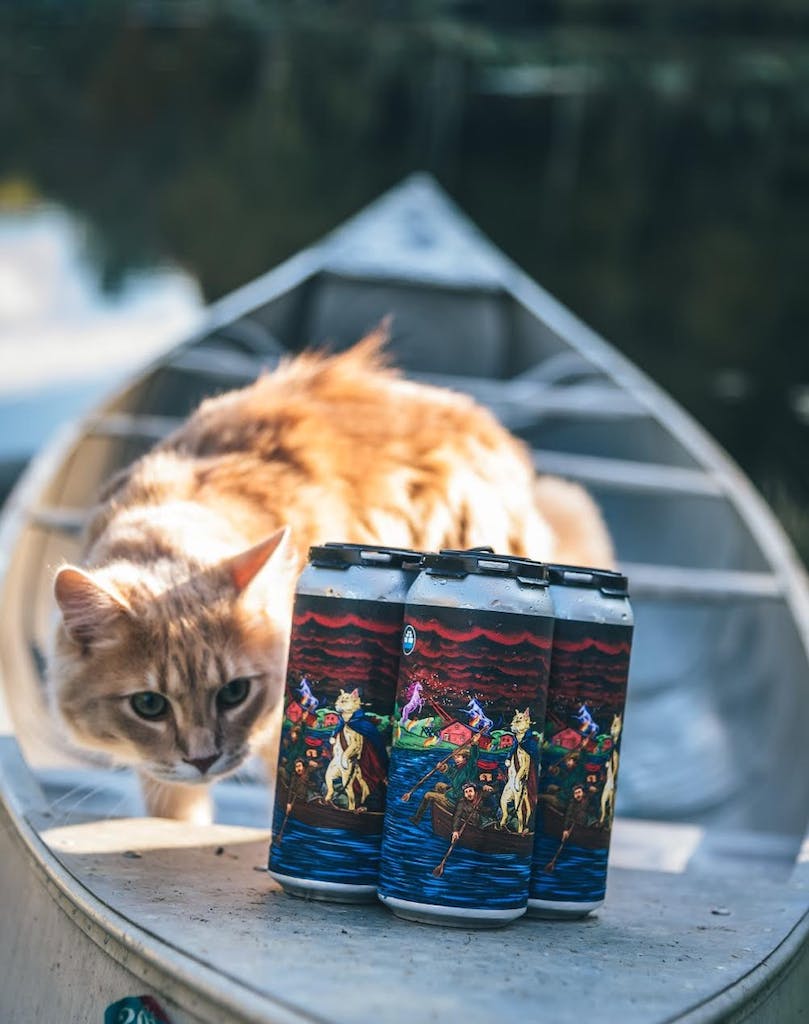 The saga will continue….

The funny thing about running such a non-stop schedule is that milestones tend to sneak up on you. Our 100th batch of beer came early this year; a gratzer aged in a single barrel that came to us from our partner-distillery Neversink Spirits. With all of the different collaborations, travel, events, addition of the tasting room and regular operation of the brewery we had yet to put our finger on exactly what we wanted to do to celebrate the upcoming occasion.

As it turned out, a beer that comes from deep within the soul of our brewery and had been in the works for quite some time was finally ready to be brewed on the very day our 200th batch was scheduled. It is already out in the market, and more will be written about it (along with greater frequency of shorter posts) when we release and can the second batch of it in a matter of weeks.

What’s the beer you ask?

Our very first IPA brewed exclusively with northeastern grown and malted grains and hopped with Michigan Copper and Bitter Gold; two varieties we grow in our yard (but are not yet using in this beer). 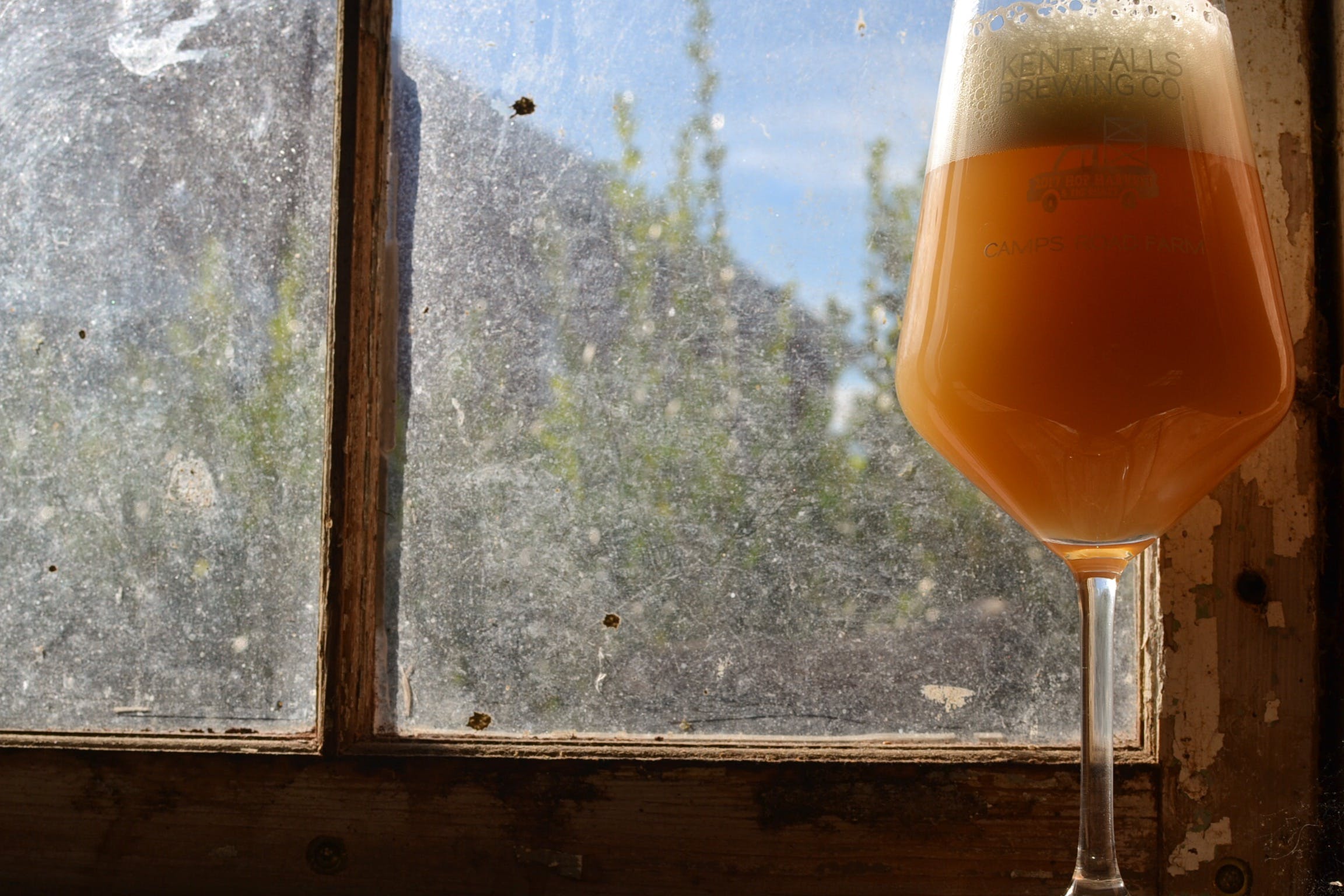 Thanks for catching up.